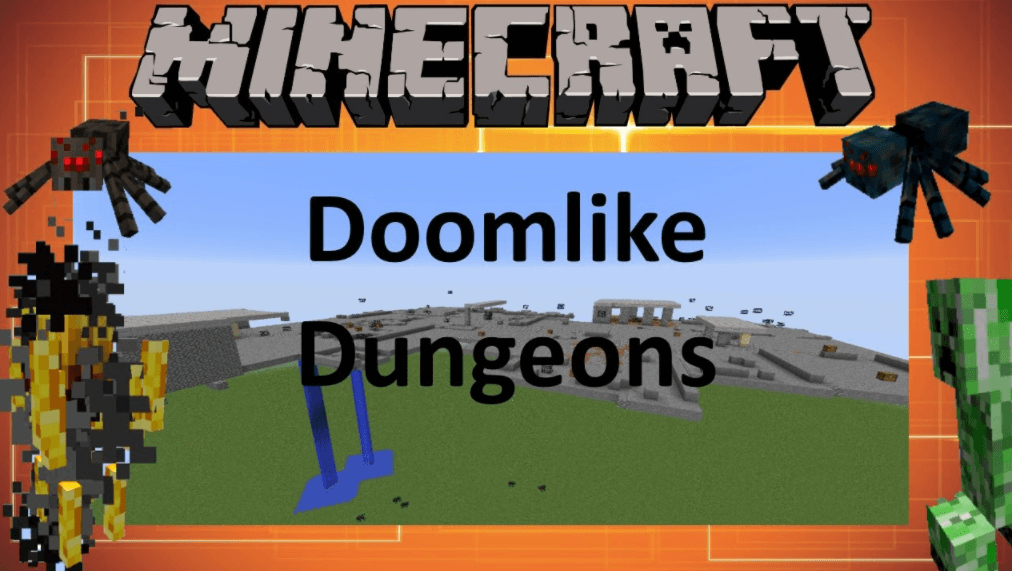 FrequencyScale: How common the dungeons are, with each increase of one making them half as common (so be careful). The default is now seven. This basically determines the average distaance between dungeons, so remember a higher number mean fewer dungeons.MinChunkXY: No dungeons will spawn within this many chunks of spawn. Note that this applies to where the center of the dungeon is, not to its edge.Difficulty: How hard the dungeons should be; this will effect the frequency and difficulty of mobs spawners.

NeverInBiomeTypes: List any biome types you don’t want dungeons to ever spawn in; default list consists only of “END” but any valid biome dictionary type will do. These must be types from the Forge biome dictionary, using the names of actual biomes will not work!ExportLists: False by default; if set to true three list (mobs,txt, items.txt, and blocks.txt) will be exported to config/DLDungeonsThemes/Lists. These are lists for mod-pack makers and other to get lists of usable content for themes with IDs / correct names.Dimensions: This list dimension, one per line by dimension ID (not the name, it must be a number) – whether or not they actually can depend on how that dimension handles world gen. The meaning of this is determined by the OnlySpawnInListedDims; if that is true it allows dungeons in the dimensions listed here, if that is false it blocks them from spawning in these dimensions. Put differently this may be either a list of allowed dimensions of a list of banned dimension.ObeyFeatureSpawningRule: If set to true (default) the mod will only generate dungeons if the world is set to spawn structures. If there will be dungeons regardless.OnlySpawnInListedDims: If true (default) dungeons will only spawn in dimension listed in the Dimensions tag (above) and not in any other; these are allowed dimensions. If set to false this is reversed so dungeons will spawn in dimensions not listed and never in those that are (should help with Mystcraft compatibility); these are now banned dimension (any others are good).SpawnWithWordgen: If set to false no dungeons will be created with world-gen, and will only exist if created using the /dldspawn command.AnnounceCommands: If true, confirmation for commands will be sent to chat.IncludeVanillaChestLoot: If true, with include loot for vanilla chest in its own chests.StingyWithLoot: If you think the chest are too generous, this will make them stingy!EasyFind: If true, all dungeons that can normally have an entrance will have at least one and all entrances will have a building or ruin around them.InstallThemes: Defaults to true. If set to false the themes folder can remain empty, though I don’t know why you’d want that!InstallThemesByCommand: Defaults to true. If set to false the /dldInstallThemes and /dldForceInstallThemes commands won’t work. Intended as a safety / security feature.AutoProfilingOn: May do nothing (usually) or write tons of stuff to the console (laggy), depending on what I have set up to profile. This should be kept turned off (leave it alone).BuildPole: Should not be used except for testing; it places a quart pillar from y=5 to y=250 through the technical centre of the dungeon and frames it with a flying lapis square marking the boundaries. Usually I’d call this cheating.DisableApiCalls: If set to true other mods cannot alters setting or themes / mob through the API (default is false).DontAllowApiOnMobs: If set to true other mods cannot add or remove mobs from themes (defaults to false), even if API calls are allowed. This can be accomplished per-theme by not assigning a theme type.

/dldspawn will force a dungeon to spawn with its technical center (might not be the geometric center) in the chunk of the player who uses it. Dungeons created in this way do not use the world seed (naturally spawning dungeons do). For obvious reasons, this should not usually be used in chunks where players have been building, mining, or otherwise changing the map (especially underground); the dungeon will over-write anything in its way.(A more advanced command may come later, but a lot of other things would need to be done first for it to work.)/dldreload will reload the config file at run-time and from in game. This effective reverses any API based config changes./dlddimid will show the player’s current dimension. Good if using with Multiverse (etc.) in a Cauldron (MCPC+) server./dldInstallThemes will (re)install and default themes that are missing. It will not overwriting any themes that exist./dldForceInstalThemes will (re)install the default themes, overwriting any existing themes with the same name.